When working with Linux you may be used to have a system monitor on your desktop like Conky or its ancestor Torsmo. If you are on OS X then you might like to use GeekTool for this purpose.

I put together a script for GeekTool that fits my needs. It will show up as a single line of text on your desktop and shows the load of your CPU, memory, disk and the transferred data on your network interfaces. The output is:

If you wonder about the green and red color… this is just for my personal convenience to be able to quickly distinguish incoming and outgoing data.

Geeklets are associated with GeekTool which should start automatically when opening a Geeklet.

GeekTool can handle much more nice stuff than printing one line from a shell script. Google for “Geeklets” and have fun.

Update: I added a second Geeklet to my desktop directly below the above one. It shows the netstat output but only with certain socket states including ‘listening’. It’s too simple to provide a Geeklet file for this one. You just have to add a new Shell GeekLet with the following command in a single line:

This is how my two Geeklets will appear: 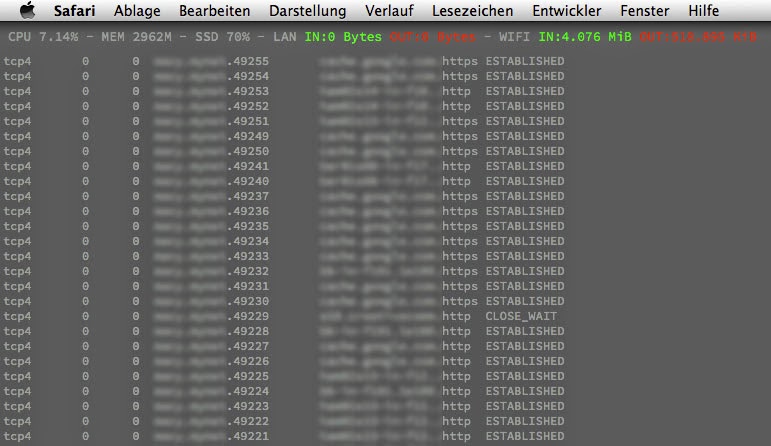